The Pumpkin - A Wicked J10 Honcho 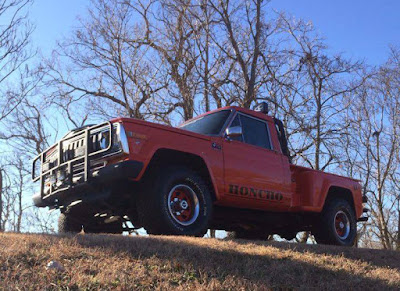 What's the only thing more beautiful than a fully-restored classic Jeep truck? Nothing! But one with a theme is always neat to see! Blaine Zietz's 1982 J10 Honcho, called "The Pumpkin" is just such a truck and you wouldn't believe the level of detail gone to on this Halloween-themed monster of a Jeep. With the original 360, two gas tanks (as per factory specs) and a seriously well-thought-out restoration, this Honcho is definitely a head turner. 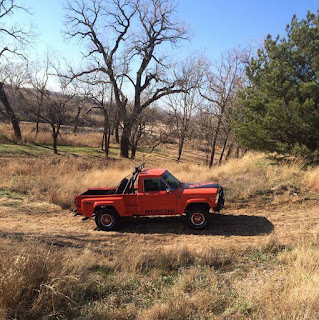 Inspired by the original "Pumpkin", a 1978 Dodge Power Wagon short bed 4x4 painted orange and black, Blaine set out to recreate the theme on his Honcho.

Blaine began scheming. How could he make this resto something really remarkable? "I see it completely restored and paint a picture in my mind down to detail on what I want it to look like before I even disassemble the vehicle," said Blaine. He does, however, often begin a project and then think, "what did I get myself into!" 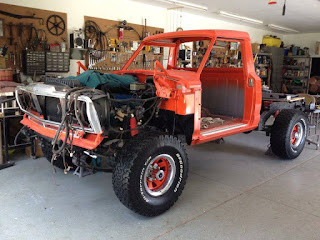 Blaine's image of the finished J10 didn't include a frame-off restoration at first, but when he crawled under the body he saw that the cab mounts were totally disintegrated. He was actually able to push the cab up off the frame!
After this discovery, Blaine (with the help of a trusty best friend) disassembled the entire vehicle, 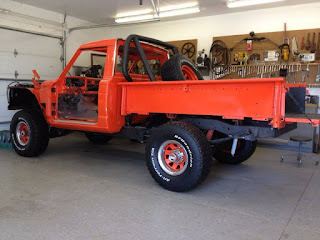 including subassemblies. He cautions though, "if you all should choose to take on such an extensive rebuild you better have a large enough space to store the parts and assemblies until you're ready to tackle each step!" Another tip of Blaine's for frame-off projects is to buy every size of zip lock bag available (and several reliable sharpies and tape to label parts). Blaine is also a firm advocate for taking photos before disassembly to make the rebuild easier. Marking where the cab rests on the frame is also a timesaver, but use a method that will last through sandblasting and painting!

When Blaine really got down to nuts and bolts he had a hard time getting the J10 cab off the frame. "These cabs consist of two layers," he said, "with a square lock-nut that free floats in between the two layers in its own metal square welded frame which allows for movement for cab adjustment and setting." At least one of these bolts snapped right out of the welded housing in between the layers and Blaine had to "perform surgery" and rebuild the internal housing through the outer layer. Sounds like a headache, right? 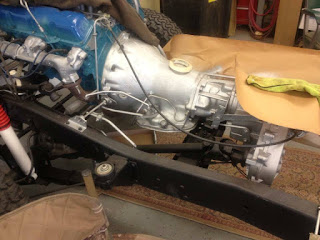 Other then the under side of the cab, Blaine was lucky that the Honcho was in pretty good shape. Other rust was minimal, except on the driver's side rocker panel (that he replaced) and a rear quarter panel (that just took a while to work with).

Removing the speedometer cluster was another point that required special attention, Blaine noted. He suggests pulling the cluster out slowly to avoid tension on the vacuum lines. "There is a bunch of vacuum [lines] on the left side behind the speedometer cluster. Do not remove too far or you'll wish you didn't!"

"When I say we literally rebuilt this truck from the ground up, we did every bearing; the motor, the transmission, the wiring harnesses - that was fun." Blaine even had a shop, Kansas Spring and Axle, produce new suspension springs at the factory Honcho specs. 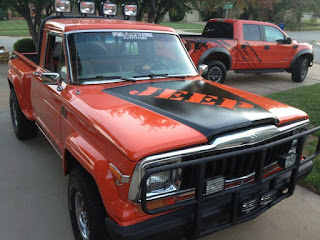 Blaine continued the intricate level of detail on every part of the restoration. All the glass is new
(except for the rear-slider). He also added tracks to install power windows.

The J10 already had the roll bar and two lights, but Blaine added two more lights to the center. He found running the wiring for the lights difficult and time consuming though. Blaine added cross-members to the roll bar to mount his spare tire and fabricated his own rear bumper using the factory brackets. 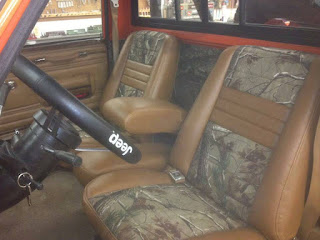 It was a rare option, but Blaine's Honcho came from the factory with two gas tanks. So Blaine got ahold of two aftermarket gas tanks, not made of steel, and used those.

As far as finishing is concerned, the 'Jeep' logo on the J10's hood is painted on, though the rest of the logos adorning the truck are all decals from Brite Line in Wichita. Blaine used bed liner on the whole undercarriage and inside the bed. He used cheap ear plugs to keep the coating out of bolt holes. "You don't want to be running taps through everything," he said. 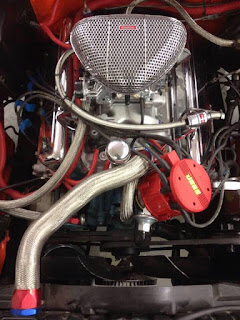 Under the hood, the Honcho sports its original AMC 360 V8 with an Edelbrock 4-barrel carb and a performance distributor. Blaine completely rebuilt the heads and installed an Aero turbine exhaust.

The Honcho is Posi- all around and has four-wheel high, low and two-wheel. Blaine went factory when it came to that suspension though. "It rides like a lumber wagon. It has no rake, if you put the front right tire on a curb the right rear is off the ground." He demanded factory and got it, he said.

For paint Blaine chose PPG 1968 Hugger Orange made for a Pontiac GTO. He used three base coats and four clear coats. "One thing I will tell you about The Pumpkin is I know the only Bondo that is on this truck is a sanding Bondo for a smoother finish or top coat before finish-primer," said Blaine. "We even brazed the driver's-side rocker panel in like the factory does at the cab corners." 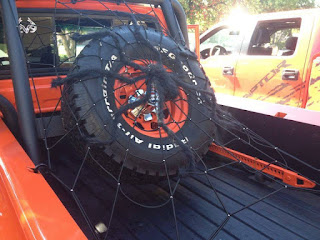 Believe it or not, Blaine said the hardest part of the restoration was replacing the windshield chrome. "That was literally a bugger," he said.

The whole restoration process took two years, from start to finish. "I wanted it done as 100 percent as I could," he said. I think we all agree; it was worth the time. Looking back on his restoration, Blaine was proud of the time he spent making The Pumpkin just so in many ways. "I would tell you if you're going to take one of these on, my best advice is take your time, do it right the first time," he said.

Feel free to reach out to Blaine at Blzf150@yahoo.com or on Facebook! 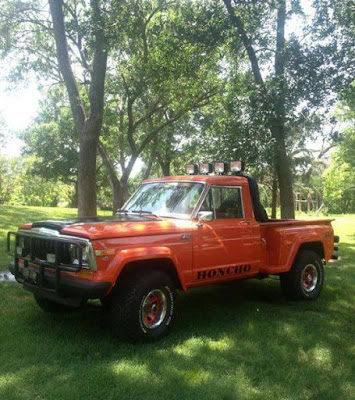 Email ThisBlogThis!Share to TwitterShare to FacebookShare to Pinterest
Labels: J-Series

Welcome to the JeepTruck.com Story Blog. Scroll down to find all of our latest stories. See each of our Sections above for a specific topic, use the Archive to browse headlines and the search bar to find specific Jeep models, parts and more.